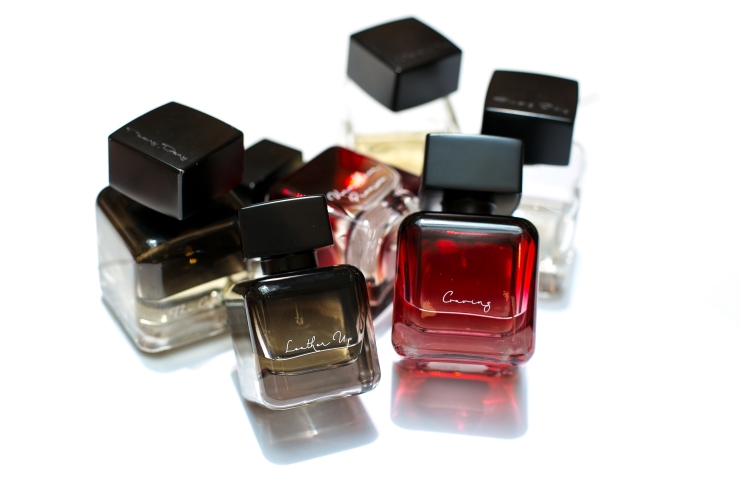 I recently had the pleasure of meeting Vietnamese artist and perfumer Phuong Dang on several occasions during her visit to Dubai to launch her Liquid Emotion collection, and I can say I’ve become well-versed and totally enthralled by her scents and story. She is beautiful, poised, strong, elegant and extremely inspiring to listen to and get to know. 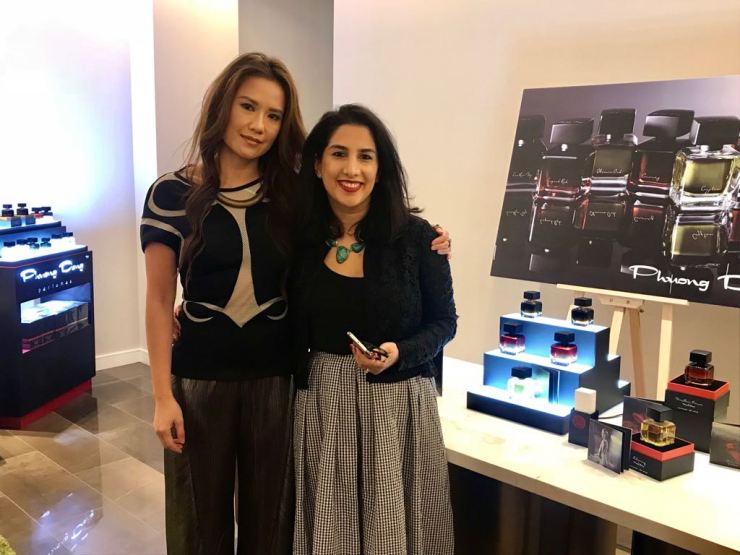 With no initial proper training in either perfumery or art, she is a living example of how talent is not acquired…After moving to London to work as a makeup artist in the fashion industry and being the creative director of Elite Model Agency Worldwide, she decided to shift her focus to express beauty through art. Probably the most unconventional artist I have been exposed to, she actually makes her own tools to paint instead of using brushes and she wears overalls and a mask in her studio because she uses lots of chemicals. Her artwork revolves around the circle of life, and consists of large, 3D paintings dubbed as “sculptural paintings”. 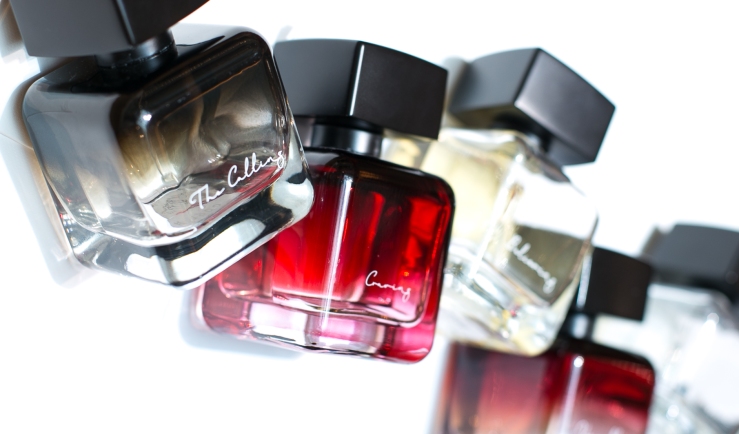 To Phuong Dang, scent is another medium of art and her Liquid Emotion collection of perfumes aims to translate human emotions into liquid form. According to Dang, when it comes to emotions, “there’s positive, there’s negative, and they always overlap.”

She first attempted to create her own scent when she moved to London as she felt that there was nothing out there for her in the market. She used to mix essential oils to make perfume for herself for more than 10 years! Eventually, she ended up contacting master perfumer Bertrand Duchaufour by sending him a long, blind letter. To her surprise, he replied back. She collaborated with him and he was impressed with how particular she is about her work. She had the privilege of working with him in his lab, and quickly found out that their common interests of painting, art and perfume enables them to have a unique language to communicate with each other.

Not only does Bertrand use high quality raw material, but he had been also working on accords (blends of materials to create a specific scent) for sometimes as long as 7 years, and she had the honor of having some of these accords used as part of her perfumes. 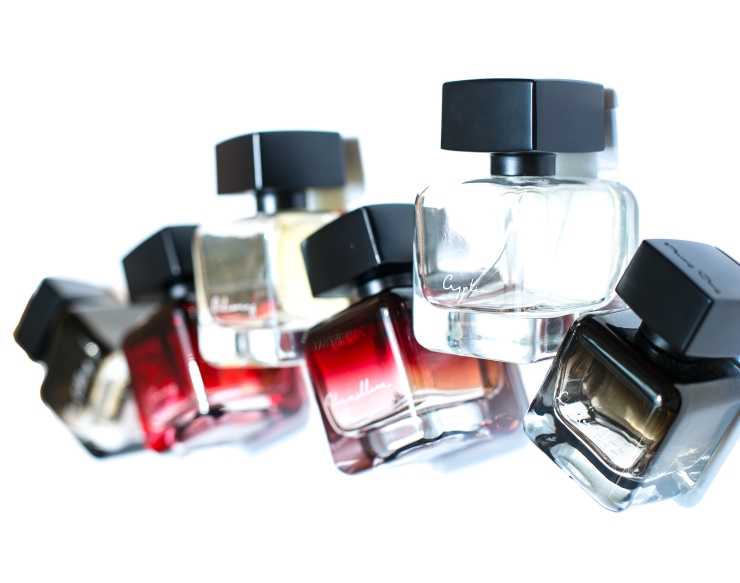 Phuong Dang’s vision for her perfumes extended to the bottle design as well. She wanted it to be “stripped down to essentials” but be structured in a way to play a part in expressing feelings and depicting the duality of human emotion. The caps are made from a “metal that feels like velvet”, which took a long time to find. The bottles are hand-crafted in France, as well as hand-laquered. The red color used on some bottles was custom made because the color she wanted was not available in Pantone, and she actually mixed it herself. 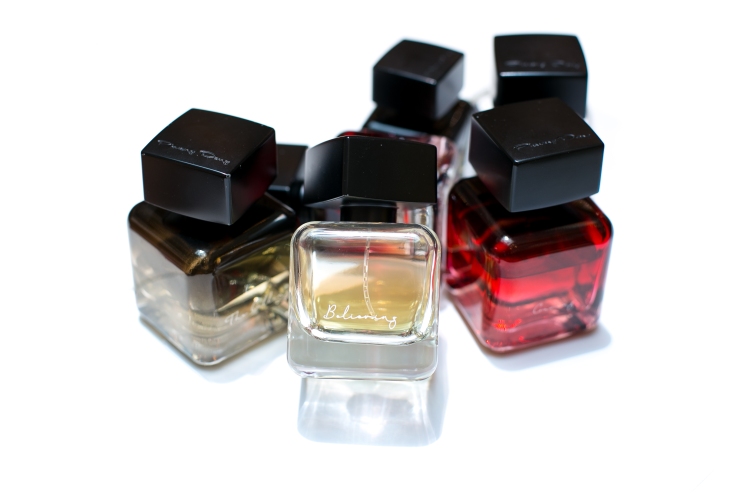 The Liquid Emotion Collection comprises of 10 perfumes, with 9 of them developed by Bertrand. It includes The Calling, Cryptic, Believing, Leather Up, Obscure Oud, Untamed Oud, Raw Secret, Craving, Liquid Red and Vermillion Promise.

The Calling is based on the first perfume she concocted on her own in London. According to Dang, it is comforting, and smells like a hug. Years after she was mixing the original on her own, Bertrand helped refine it, perfecting the scent and sillage.

My favorite perfume out of her collection has to be Cryptic. According to Phuong Dang, her aim with Cryptic was to capture the essence of life. Life is very mysterious, and is always circling within itself. Life and everything is based on energy and vibrations, and she wanted to capture that vibration right from the essence. 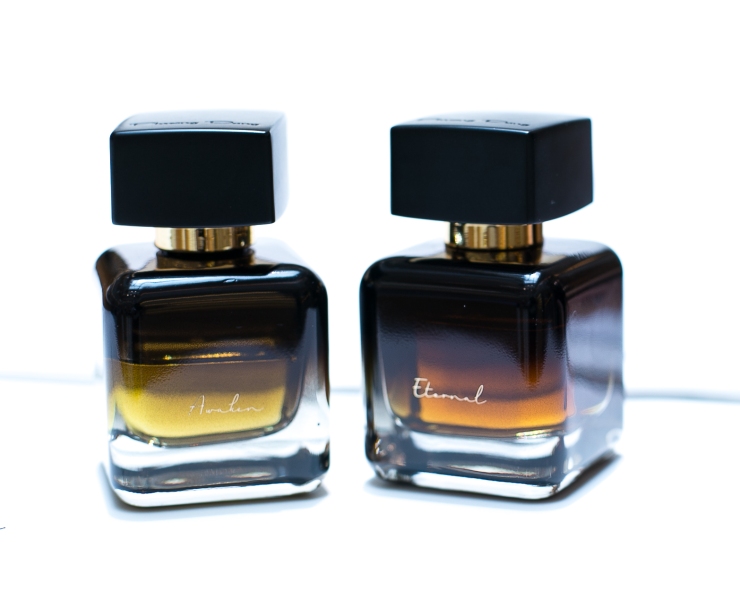 She also launched 2 exclusive oud-based perfumes for the Middle East region, Awaken and Eternal. Vietnam has a long history of using oud, especially to ward of evil and negativity. As an ingredient, oud is highly valued in the perfume world because its scent is multi-faceted; it covers all the aspects of perfume, including fruity, woody, resin, floral and leather.

The Liquid Emotion collection by Phuong Dang is slowly being launched worldwide. It is already available in Barney’s in the US, Russia, the UK and the Middle East. In Dubai, the brand is available in Mademoiselle (City Walk and Galleria Mall) as well as Robinsons, and includes the two exclusive perfumes she created for the region.

One thought on “Familiar Faces: Phuong Dang and her Liquid Emotion Collection”