I jumped on the Oui Shave bandwagon almost a year ago and I thought I would share my thoughts on the Carrie razor and their shave oils before they officially launch their revamped collection.

In brief, Oui Shave was founded to revolutionize shaving for women. The brand claims that their single blade safety razors are superior to the several-blade ones we have grown accustomed to because they don’t shave the hairs from under the skin and cause ingrowns like the latter do.

I have to admit I was enticed by the looks of Carrie, the brand’s razor for petite women. It looks so retro, and it’s golden, so I was sold. The fact that the brand also claims that razor burn, bumps and in-growns would be a thing of the past with the use of their razors also helped convince me to buy. 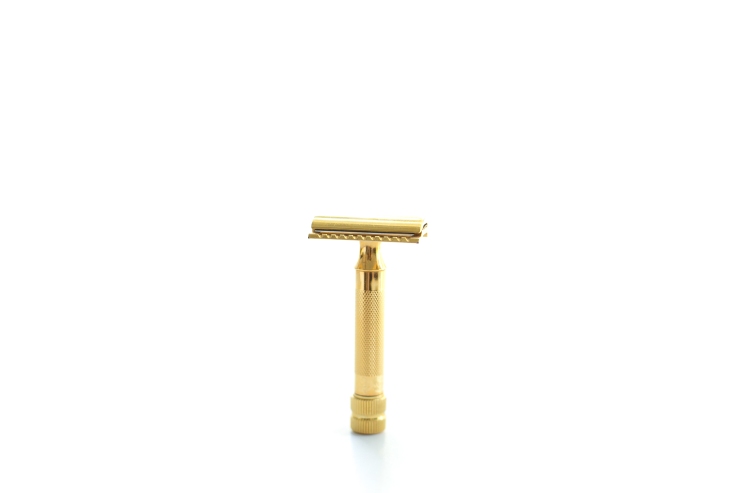 The razor is a work of art and a lovely addition to my bathroom. It took me a while, and a lot of nicks, to figure out how to use it though. The trick is to basically let it glide without pressing too hard on the handle. It leaves my skin smooth, but not the smoothest EVER, if you know what I mean. On the upside, I can actually shave the same area every single day without feeling any irritation whatsoever, which is not possible for me with normal razors.

The blade is supposed to last for a month but I honestly can’t get it to, and I have no idea what I’m doing wrong. I dry the razor after using it and I don’t keep it close to water, yet my blades still rust very easily. I also have a bit of an issue with the shave oils; they smell heavenly, leave the skin soft even after rinsing them off, but they gunk up the blade so bad I have a lot of trouble rinsing it after. So I lay off the shave oils and I now just shave under the running water. Sinful, I know, but it works best for me.

I love Carrie and have never cheated on her…except a couple of times when I traveled, with a disposable one, purely because of convenience. I’m excited to know what is changing in the new razors that are coming out soon. Knowing that safety razors last a lifetime, these new razors have to be revolutionary for me to go ahead and buy a Carrie 2.0. Let’s see…

In a world where people strive to look the same, to conform and to fit in, I choose to embrace my individuality. Because no one else can play my part, and the more congruent I am with myself, the more genuinely I can share . My contributions to this universe might be relatively tiny, but they sure are mighty in their uniqueness. ⁠
🎇 What minimalist skincare dreams are made of 🎇⁠
Ethical & sustainable jewelry⁠
A minimalist's dream⁠
Best natural toothpaste 🦷⁠
Saie Mascara 101 & Brow Butter⁠
My Covid Experience...⁠
𝗪𝗵𝗮𝘁 𝗴𝗼𝗶𝗻𝗴 𝗴𝗿𝗲𝘆 𝘁𝗮𝘂𝗴𝗵𝘁 𝗺𝗲 ⁠
Loading Comments...
%d bloggers like this: